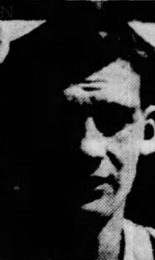 Born to Hungarian immigrants, Talos grew up in Celveland and played basketball at Ohio Wesleyan where he studied business law before a professional season with both the Columbus and Dayton franchises in the Midwestern League. He played minor league baseball for six seasons, primarily in the Indians' farm system. Talos served his country during World War 2.


Stats:
http://probasketballencyclopedia.com/player/ernie-talos/
Posted by Peach Basket Society at 5:44 AM