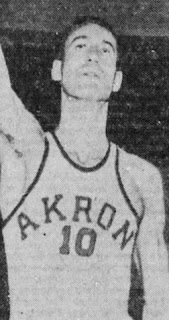 Preusse went to Akron South High School and then went to UA to study engineering. Despite his height of 6'5, he did not play basketball until his senior year in high school, and was playing intramural hoop at Akron when he finally made the varsity team as a senior. After working for Goodyear, he served in the army during World War 2 and the Korean War. He died in 1973.

He and his wife, Mary Ellen, had three sons.


Stats:
http://probasketballencyclopedia.com/player/bob-preusse/
Posted by Peach Basket Society at 4:55 AM