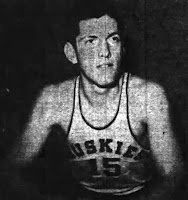 Born to Rudolph and Gertrude and Nichols in Wanatchee, Washington, Jack attended Everett High School before enrolling at UW. He played basketball at USC for a couple seasons. (Not sure if he was there while serving in military during World War 2.) After finishing back at UW, he played basketball for 8 seasons professionally. While with the Celtics, he was also back in school at Tufts, earning his degree in dentistry. He was the team dentist for the Seattle Supersonics as well as UW. Dr. Nichols died in 1992 in Palm Springs, California.

Stats:
http://www.basketball-reference.com/players/n/nichoja01.html
http://www.justsportsstats.com/basketballstatsindex.php?player_id=nichoja01
Posted by Peach Basket Society at 6:59 AM