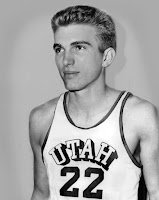 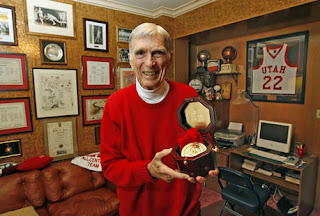 As one of four starting freshmen, Ferrin lead Utah to an upset victory over Dartmouth to claim the 1944 NCAA title. He served in the U.S. Army at the end of World War 2, missing a year of school at Utah. He eventually returned, and despite an offer from the Pacific League of $800 a week to play basketball, he insisted on finishing his schooling instead. He then played three seasons for the Lakers.

After an attempt at a golf career, Ferrin later was the GM for the Utah Stars of the ABA, the Athletic Director back at the University of Utah and the chair of the NCAA Basketball Tournament Selection Committee.

Posted by Peach Basket Society at 6:10 AM