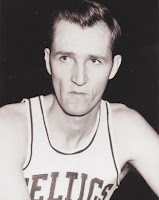 Born in Fort Wayne to Norman and Mary Agnes Roberts, Bill attended Notre Dame before transferring to Wyoming. After college, he played pro basketball for a few years before returning to Illinois where he was employed with Reynolds Aluminum before retiring in 1973, after which he owned a Dairy King and BJ's Confectionary. He briefly lived in Texas before returning to DeKalb, where he died in 2016 at 90 years of age. An avid golfer, he began playing at age 9 and was a professional instructor.

Bill married Betty Jean Sortor in 1949 and they had one daughter, Kathleen.

Stats:
http://www.basketball-reference.com/players/r/roberbi01.html
http://www.justsportsstats.com/basketballstatsindex.php?player_id=roberbi01
Posted by Peach Basket Society at 4:14 AM