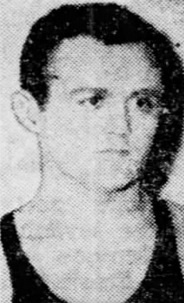 Paine starred at Westminster College, interrupted with his service in the U.S. Navy during World War 2. He played in various professional leagues in the Eastern U.S., including a brief stop with Providence in the BAA. Paine was also a fine amateur golfer, winning the Pennsylvania amateur title and competing in the national tournament five times. He worked for Nalco in the Metals Division for many years, eventually becoming he President of the International Division.

Stats:
http://www.basketball-reference.com/players/p/painefr01.html
http://www.justsportsstats.com/basketballstatsindex.php?player_id=painefr01
Posted by Peach Basket Society at 4:09 AM