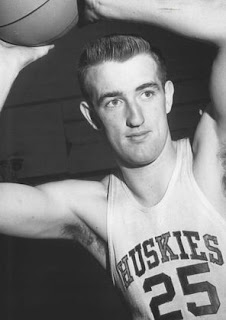 
The 6'7 center and forward with a sweet hook shot was an All-American was Washington, scoring 1774 points in three years there, scoring 49 of them in one game against Idaho in his senior year. He lead the Huskies to the NCAA Final Four in 1953, and afterwards was drafted in the first round (third overall) by the Milwaukee Hawks in the 1953 NBA Draft. He was traded to the Baltimore Bullets barely a month into the 1953-54. When the Bullets dissolved in the early part of the next season, Houbregs was selected by the Celtics in the Bullets Dispersal draft.  He would go on to play 5 years in the NBA with four different franchises.

Done with playing basketball. he did not leave the sport. He would serve as the Seattle SuperSonics' general manager during their early years from 1969 to 1973. Houbregs would be elected to the Naismith Basketball Hall of Fame in 1987.

Posted by Peach Basket Society at 7:58 AM