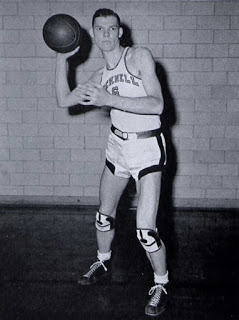 Louis Decsi, Jr., 95, passed away November 19, 2018 in Englewood Florida. He lived most of his life in Glastonbury, CT and 12 years in Old Saybrook, CT before moving to Englewood Fl.Raised in Akron Ohio, he served in the Navy for 3 years in WWII. He graduated from Bucknell University with a B.A. in Economics in 1948 attending Harvard University via its ROTC program and the Navy's V-12 program at Bucknell. He was a member of Sigma Chi fraternity at Bucknell and was captain of Bucknell's basketball team and co-captain of Harvard's basketball team that went to the NCAA basketball tournament held in Madison Square Gardens. He continued his basketball career professionally with the Sunbury Mercuries from Sunbury, PA and tried out for the Boston Celtics who sent him to their farm team, the Hartford Hurricanes, in Hartford, CT.He was an Assistant Treasurer of the Hartford Insurance Group and ITT Hartford, retiring after 37 ½ years of service. He was past president of the Hartford Insurance Group's Men's Club, captain of their All-Insurance Basketball Team and captain of their Men's All-Insurance Duckpin Bowling team. He was a past life member of Englewood's Elk's Club, a life member of VFW post 10420, a member of Rotunda American Legion and a member of Senior Friends.Lou was an avid golfer who golfed at least twice weekly into his early nineties (his years not his score!). He enjoyed playing cards, both bridge and poker. He and his wife of over 40 years, Ellen, loved to dance. Lou continued dancing after her passing, meeting his companion of over 10 years, Maye Pikiel of Rotunda, Florida. He leaves many dear friends in the community of Englewood, FL including Joe and Jean Demko, and Mickey and Beverly Beaudoin He leaves his children Mary-Kate Russell of Fort Lauderdale, FL; Michael Decsi of Whitehall, NY; and Brigid Nessing of Manchester, CT; and his grandchildren Frederick and Sarah Russell, Paul Decsi and Brian Nessing. There will be a mass in his remembrance at St Raphael's Church, Englewood Florida, Tuesday December 4 at 10AM. In lieu of flowers, donations made be made in Lou's memory to the American Heart Association/American Stroke Association PO Box 417005 Boston, MA 02241-7005 or a charity of your choice.

Posted by Peach Basket Society at 4:23 AM