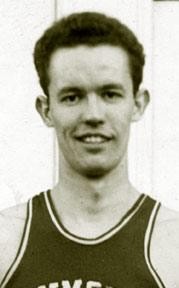 Originally from Colorado, the highly-recruited 6'7 player went to Monmouth. Injuries limited King to just two games in his first two years, but he recovered and played full season at Monmouth before graduating. He moved on to Northwestern to attend Garrett Bibilical Institute (a seminary), and in one season at NU, finished fourth in the Big 10 in scoring. He moved on to become a pastor and educator in Kansas City, Missouri before returning to Colorado. He died in 2004.

He was married to Mary Margaret and had four children.

Stats:
http://www.basketball-reference.com/nbl/players/k/kingle01n.html
http://www.justsportsstats.com/basketballstatsindex.php?player_id=kingle01
Posted by Peach Basket Society at 5:37 AM