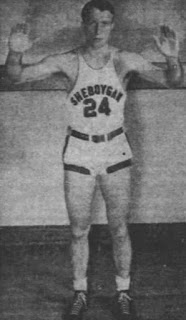 
Otto Kolar was born to Anton (1878-1951) and Anna (1876-1920). From Cicero, Illinois, Kolar graduated from Morton High School and played professionally for various outfits during the 30's, including the industrial team for Western Electric, where he was also employed during the day. Allegedly played college ball at Wisconsin-Oshkosh but his obituary implies otherwise. His brother, Eddie Kolar, also played professional basketball.
Otto married Mildred Borvanski in 1939 and the couple had two children.

Otto's brothers James and George both died with two weeks of each other in 1935. I wonder how?


Stats:
http://www.basketball-reference.com/nbl/players/k/kolarot01n.html
http://www.justsportsstats.com/basketballstatsindex.php?player_id=kolarot01
Posted by Peach Basket Society at 5:05 AM