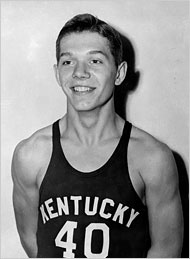 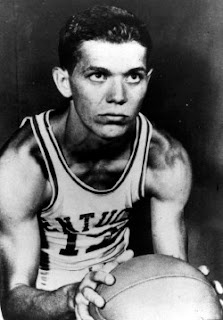 A star at UK, Beard moved on to the NBA, playing for the Olympians and being named to play in the league's first All-Star Game. However, as the 1951-52 season approached its start, he was named along with many other players to be involved in point-shaving while in college. This was huge scandal that brought down CCNY, the NIT and NCAA winner in 1950. Beard, along with fellow Wildcats Alex Groza and Dale Barnstable, were accused of shaving points at UK. Beard contended that he never shaved points but did indeed take the gambler's money. The three Wildcats pleaded guilty and were given suspended sentences. Beard and Groza, teammates on the Olympians, were banned for life by the NBA.
Beard worked for many years as a pharmaceutical executive for many years, dying in 2007.

Ralph was married to Bettye Scott in 1955 and they had two sons.

Posted by Peach Basket Society at 3:51 AM